A light in the Darkness for Teen Moms

Holly Smith, coordinator for Hidalgo County YoungLives, is working hard to bring a program designed to help teen moms to McAllen. The YoungLives program is a ministry directed toward mentoring and supporting teen moms to continue their education, be successful and nurturing parents, and establish a sense of hope that otherwise would have been forgotten.

While teen motherhood usually translates into a loss of hope for a future and is seen as a financial setback to a thriving community, YoungLives offers a place of respite, encouragement, and a sense of belonging to individuals that otherwise would not have any.

“I was a young mom and I felt alone,” Smith said. “Like there was nobody else, there was no place for me. I just didn’t have a place where I fit in. And this gives the girls a place where they feel like they fit in and there are other people that are like them and that they have women who are encouraging them and reminding them of their identity in Christ. And they haven’t ruined their life. They just took a detour. It’s going to be a little bit harder, but they can be just as successful as everybody else. I think I would have really liked to have that kind of support.”

The program is part of an international nonprofit, Young Life, that has offered teenagers services and camps since 1941. In 1991, the ministry saw the need to reach teen moms specifically, creating the now established ministry of YoungLives. The program aims to support young moms through one-on-one mentorship and peer support, in hopes it would lead the young women to find purpose, confidence, and an identity in Jesus Christ.

So why bring YoungLives to McAllen?

“I think the unique thing about YoungLives is it’s not just touching one life, it’s touching two or three or however many kids there are,” Smith said. “It’s generations to come, not just one generation. And I think these girls need a lot of support. And there’s just not a place or anything for them.”

Another distinct characteristic about YoungLives is the combination of meeting the girls’ physical needs as well as their spiritual needs.

“It’s really important to help meet their needs, not just say, ‘hey, you should believe in Jesus,’ but, you know, show them what that looks like,” Smith said. “You can’t spend just five minutes with them and expect them to trust you. You have to be willing to invest time into their lives as a mentor. The girls have probably been through a lot and it’s hard to trust someone really cares about them.”

According to a 2017 study published by the National Center for Health Statistics, 8 percent of all births in the U.S. are to teenagers. Texas has the third-highest teen pregnancy rate in the country. Texas Department of State Health Services figures show there were 16.5 births for every 1,000 girls from 13 to 17 years old in 2012.

But the Valley has some staggering statistics of its own, leading in pregnancy rates throughout the country. According to a KGBT-TV story, every county in the Valley had higher rates than the state average, some nearly double. In 2012, per 1,000 girls ages 13 to 17, Cameron County had 25 births, Hidalgo County had 24.6 births, Starr County had 30.2 births, Willacy County had 30.3 births, and Zapata County had 54.8 births.

The statistics clearly indicate that a program like this is greatly needed in this area, which is heavily impacted by teen pregnancy. YoungLives strives to shift the view of these girls from burden to belief for the teen moms of McAllen. The program has been operating out of Harlingen for the past six years, and has seen great success.

Over the course of 15 months in 2014-15, an independent evaluator, 3 Flights Inc., did a study to see if the behaviors and attitude of teen moms were being impacted by their participation in the program. And the data confirmed that YoungLives makes a difference. For example, because the arrival of a new baby brings many challenges, teen parents are more likely to suffer higher rates of abuse and neglect, according to a 2006 study by The National Campaign to Prevent Teen Pregnancy. But teen moms who have a consistent and encouraging mentor through the program report feeling increased nurturing behaviors toward their child and a stronger conviction to avoid getting pregnant again. These moms are also beating the odds when it comes to high school or college graduation. On average, only 57 percent of teen moms graduate from high school or get their GED, according to a 2010 Child Trends study, though girls new to YoungLives only have a 25 percent chance. However, after two years of participating in the program, those chances go from 25 percent to 72 percent more likely to obtain their diploma. In addition, the longer teen moms are involved, the more likely that are to say they want to seek a college degree.

Teen moms often feel lonely, like they don’t belong, and overwhelmed by the challenges of motherhood, leading to risks of developing senses of depression, anxiety, and lack of purpose. But the caring acceptance of a team of people who love them, especially a caring mentor, brings them solid social support and an outlet of hope in a crisis. Giving them a place to feel like they belong is directly countering the culture’s normal view of “you ruined your life” because of being a teen mom. It instead offers caring, acceptance, understanding, purpose, and, above all, the knowledge that their problems are not what make them who they are.

So how can someone help out with YoungLives?

According to Smith, the immediate need of YoungLives is prayer, but also formulating a dedicated and willing committee to oversee the start of YoungLives on a McAllen high school campus. Having committed volunteer mentors to spend consistent one-on-one time with the girls is one of the most important roles in the program. Monetary donations, as well as food or clothing donations, are also always welcomed.

Starting a program like this in a place that otherwise neglected these young moms, whether consciously or subconsciously, will not only impact the lives of these teens and children, but our community as whole. Here’s giving thanks to the people who are working hard to speak out on behalf of the voiceless.

“Speak up for those who cannot speak for themselves, for the rights of all who are destitute. Speak up and judge fairly; defend the rights of the poor and needy.” (New International Version, Proverbs 31:8-9).

For more information on the program or how you can get involved, contact Holly Smith, YoungLives coordinator, Hidalgo County, at hidalgoylvs@gmail.com or visit the website younglife.org. 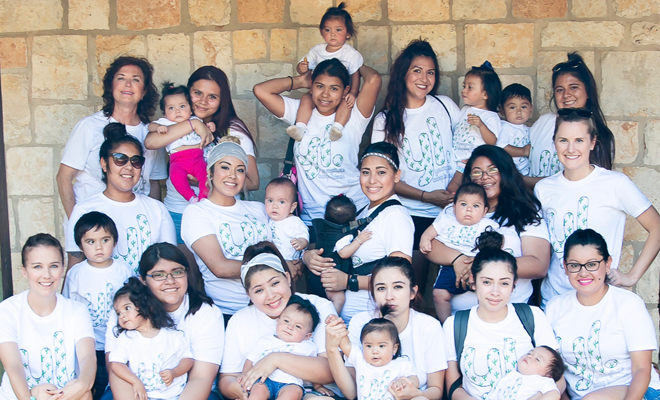