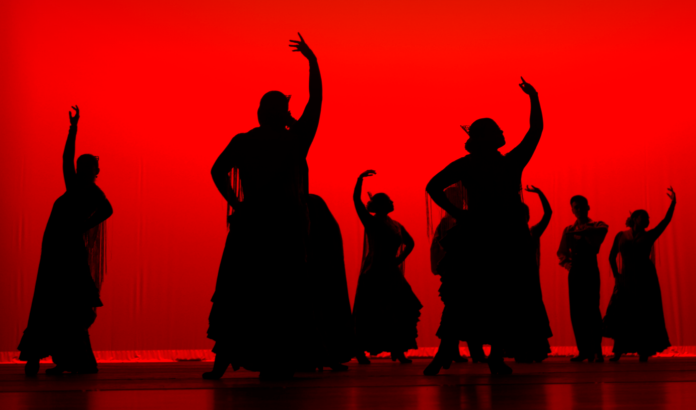 A La Música is a flamenco dance performance premiering February 13th and 14th, 2023, at UTRGV. This unique event bringing dancers and musicians from Spain and México is organized by Ballet Español Director Sonia Chapa Gomez and Katherine Moore McAllen, Director of the Center for Latin American Arts (CLAA) at UTRGV. 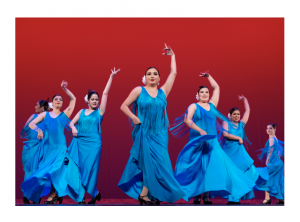 Professional flamenco dancers Daniel Caballero Pérez and Nerea Carrasco are visiting South Texas from Madrid, Spain, where they perform at famous flamenco tapas venues, or tablaos, and at theatres with other renowned flamenco artists and live musicians.

Caballero Pérez is a fixture on tablao stages around Madrid, and he works frequently with flamenco stars like El Piculabe, guitarist Jeronimo Maya, and La Familia Losada. He also travels around the world performing and teaching master classes.

Caballero Pérez is not only a professional flamenco dancer but also a celebrated choreographer, talented musician, and innovative composer. This spectacle at UTRGV’s Performing Arts Center, A La Música, is his creation with dazzling original scores, choreography, and light design. The RGV will be the first to experience this original concert in a Valentine’s Day extravaganza in Edinburg with special dinner packages provided by The Sidebar Restaurant.

These performances created by Caballero Pérez will be a captivating flamenco experience to entertain all audiences. The uniqueness of flamenco dance has roots in Indian, Arabic, and Spanish traditions. As an art form, flamenco dance also exhibits artistic and cultural expressions through the dedication, skill, and passion needed to execute a Ballet Español performance of this caliber. The footwork, arm movements, sounds, and rhythms of the music are mesmerizing.

This diverse style of flamenco is the result of the Roma migration from Rajasthan (in northwest India) to Spain between the ninth and 14th centuries. These migrants brought with them musical instruments, such as tambourines, bells, and wooden castanets, and an extensive repertoire of song and dance.

Chapa Gomez, artistic director of Ballet Español at UTRGV, teaches the art of Spanish dance that encompasses a great range of styles, such as bailes folklóricos representing different regions of Spain; flamenco, the art of the gypsies of Spain; and “palos,” such as Alegrías, Tangos, Solea, Bulerías, Siguiriyas, and Escuela Bolera, a style of classical ballet principles that combines typical Spanish arm movements with castanets and flamenco footwork.

The UTRGV Ballet Español group is comprised of students who learn the flamenco dance art form and present a formal concert once a year. The UTRGV CCLAA has sponsored and supported this group every year since its inception. Last year, the student’s performances provided exciting entertainment for K-12 schools and the RGV community.

The Center for Latin American Arts has also helped this student group travel to San Antonio to perform, which gives them the experience they need to succeed and complete their Bachelor of Arts degrees in dance.

This student group is also presenting flamenco performances for the Spanish Nights Annual Student Concert Series on January 27th and 28th at the UTRGV Performing Arts Complex in Edinburg at 7:30 p.m. On Feb. 13th and 14th, the CLAA sponsored A La Música concert series featuring Caballero Pérez and Carrasco will collaborate with the UTRGV Ballet Español student group as well.

The A La Música concert series organized by the CLAA is made possible by the generous financial support of the Raul Tijerina, Jr. Foundation and the Alice Kleberg Reynolds Foundation. With this funding, the CLAA is also sponsoring master classes in flamenco dance for UTRGV and K-12 students in the Edinburg Consolidated Independent School District and the Pharr – San Juan – Alamo Independent School District led by Chapa Gomez and the visiting artists from Madrid.

Additionally, Sidebar Restaurant in Edinburg is collaborating with the CLAA to create a special Valentine’s Day dining experience paired with the A La Música concert series.

Caballero Pérez will also be working to prepare students with a special choreography, which they will perform in the spectacle.

This concert series highlights the special talents of the CLAA, which aims to engage the community by offering exceptional concerts led by passionate faculty. Furthermore, it provides an opportunity for audiences to learn about Spanish culture and diverse dance forms in affordable concerts at UTRGV during Valentine’s week.