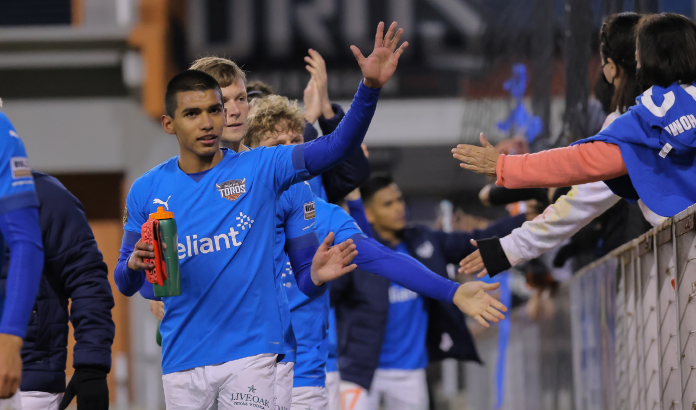 The RGV FC Toros USL soccer games have been a longtime favorite pastime for the residents of Edinburg. Not many people realize the Toros provide entertainment for the Rio Grande Valley and offer a pathway to bigger dreams for young soccer players.

One of those soccer players is 17-year-old Duilio “Zurdo” Herrera, a homegrown player who just signed his first professional contract with the RGV Toros while still in high school; his contract is what is known as a USL Academy contract, which retains amateur status for the player to provide the future opportunity to pursue an NCAA career if desired. The oldest of seven kids and originally from Reynosa, Mexico, Herrera has played for the academy for five years and was scouted as a young player in a 7v7 league.

“To finally be able to sign at a very young age is something unreal to me, and it’s something me and my family are very proud of,” Herrera said.

Although Herrera is no stranger to playing the game, he explained that his time with the academy has positively impacted his soccer career.

“I didn’t know much about the techniques and strategies,” he said. “Playing with the academy leveled up my soccer. We have these amazing high class coaches that not only teach you how to play, but how to move when you have the ball — which is the most important thing.

“Seeing how my soccer career has grown and how it was back then, I definitely thank the academy for all the skills I know to this day.” 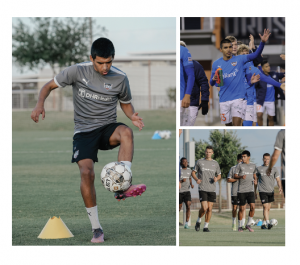 The Toros recently restructured their academy by joining the MLS Next League, which is excellent news for the youth soccer players of the Rio Grande Valley. Soccer academies are great for many reasons apart from upping one’s soccer game. Both USL and MLS Next academies, like the RGV FC Toros, give young stars exposure they cannot get elsewhere.

Through the academy, Herrerra has had the opportunity to play against top-tier professional teams including CF Monterrey of Liga MX. Herrera said he had never imagined the possibility of playing a world-class team from Mexico.

“Being able to play those small minutes and getting an assist, it was unreal,” he said. “Even though we lost, I was really happy.”

Despite the exposure and signing with a professional team at a young age, Herrera has a great head on his shoulders and has his sights set on pursuing an education in physical therapy while continuing to foster his soccer career. He keeps close tabs on his grades off the field, but still makes time for watching movies and listening to Bad Bunny’s new album.

An academy coupled with a professional team also provides a unique opportunity for young players to truly see themselves as a professional athlete one day. Representation matters.

Herrera offers advice to kids who one day would like to be in his shoes.

“Always have a dream,” he said. “If you dream and don’t put in the work, your dream will never come. So you have to work for it; give it your all in your life. Whatever you do, you have to give it 100%.”

Moving into the season, Herrera plans to give it his all for himself and his team.

“I want to give my all to the team and to the coach and do what I need to do to help my team win and get into the playoffs,” he said.

As a former MLS player for the Colorado Rapids and San Jose Clash (now known as San Jose Earthquakes)Technical Director and Assistant Coach Rafael Amaya is part of what makes this academy unique. Coach Amaya shares the importance of education as being part of a well-rounded athlete.

“The game is 90 minutes, but an education is life-long,” he said. “Our players must maintain a 3.0-plus GPA to participate. We have to make sure they’re not missing school or struggling at school.

“Our mission is to give back and support their development both academically and with soccer.” 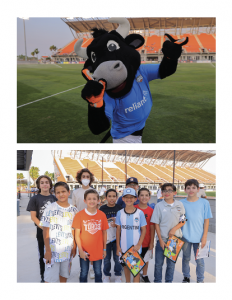 Players come from all over the RGV to participate in the MLS Next Program. Many players drive up from Brownsville multiple times a week to take part in what the academy has to offer. This academy offers travel, insurance and exposure, as kids are afforded the opportunity to play other MLS Next clubs tied to major league soccer clubs across the nation.

Players also work towards their coaching license, so when they have reached the end of their academy career they can even use their talents as a coach.

“We’re not only developing future players, but the future coaches and directors that will keep this program going,” Coach Amaya said.

Many kids from their program have been able to leverage their soccer abilities to pursue an education at schools including The University of Texas Rio Grande Valley, University of the Incarnate Word, Southern Methodist University, Houston Baptist University and others.

For more information on the RGV FC Toros’ MLS Next Academy, visit rgvfcyouthacademy.com.