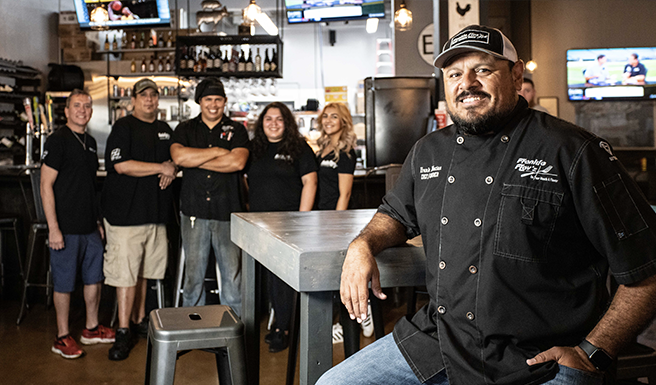 In central downtown Harlingen resides Frank Macias’ first sit-down restaurant, Frankie Flav’z Craft Burger House. Macias first started his business five years ago in the form of a food truck and has since expanded to two more locations in Harlingen. The first one, located at The Point on Harrison Avenue, opened May 2017. The newest location went up on Sunshine Strip in June.

In Frankie Flav’z first few years of business, it has become a popular food hub for both locals and tourists.

Jesse Luna, a San Marcos resident who has family in the Valley, says he makes it a point to eat at Frankie Flav’z every chance he gets.

“I don’t get to come down as much as I’d like, but when I’m here, I always make sure I stop by and eat at least once with my family or friends,” he said. “The El Luchador burger is my go-to. It’s amazing.”

Despite his restaurant’s success, Macias didn’t start out with a career path in the food industry in mind. 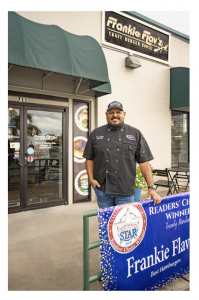 “The way I started was, I was cooking lunch for my wife to take to work. She’s a nurse at the hospital,” Macias said. “At the time, I was actually going to school for nursing and getting ready to become an LVN.”

Macias was making meals such as burgers, brisket sandwiches, and grilled chicken club sandwiches. After trying his food, his wife’s coworkers were interested in purchasing lunches.

“So I made them lunch one day and from there, it just spread like wildfire. People were liking what we were making,” Macias said.

With the demand and newfound business opportunity, Macias knew he wanted to open his own restaurant.

A food truck was his first means of getting into the restaurant world. With the help of his brother-in-law and head chef, Chris Ramos, Macias took a leap of faith and opened Frankie Flav’z in August 2015.

That following helped Macias stay in business and grow his mobile restaurant into his first brick and mortar establishment at The Point, located at 115 E. Harrison Ave in May 2017. Its hours are 11 a.m. to 9 p.m. Monday through Thursday and 11 a.m. to 10 p.m. Fridays and Saturdays.

Macias said he was approached by a business owner who had a bar with an available kitchen and offered him a partnership opportunity.

“I didn’t think I was going to open up something as fast as we did, but the opportunity was there,” he said. “So I knew I had to seize the moment. If you don’t try, you never know.” 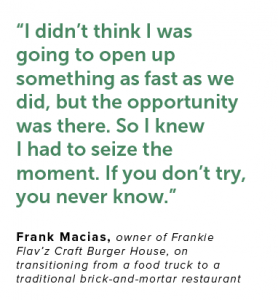 Customers can look forward to monthly Sunday brunch events from 11 a.m. to 3 p.m. with discounted popular brunch menu items like mimosas and chicken and waffles. Fridays and Saturdays from 9 p.m. to midnight, Macias said the restaurant has acoustic live music for its patrons to enjoy.

The restaurant has both beer and wine options on the menu, with one of the latest refreshing drink offerings being a “wine-a-rita,” formulated with a wine base and agave for sweetness.

“We specialize in a lot of craft beer,” Macias said. “We support local craft breweries from Austin all the way down to Mission. We’ve got four beers out of 5×5 Brewing Company in Mission on tap. We’ve got 15 beers on tap total.”

Since opening his establishments, Macias has gained recognition and distinction for his culinary creations. Valley Morning Star named Frankie Flav’z Best Food Truck its first two years in business. In 2018, Macias won the Small Business Award from the Harlingen Chamber of Commerce.

This year, Macias won the annual Humanitarian Award from the Harlingen Rotary Club due to his way of giving back to his community by helping feed those affected by the recent floods. Macias also earned Valley Morning Star’s 2019 Reader’s Choice Award for Best Hamburger.

Last year, Macias had the honor of hosting Texas Gov. Greg Abbott in his restaurant.

“He came to do his final thought for his campaign. That was pretty cool,” he said.

As for the future of Frankie Flav’z, Macias sees more expansion ahead.

“I want to mimic the concept and take it to McAllen and Brownsville,” he said. “I’m looking forward to what’s next.”

For more information on Frankie Flav’z latest news and upcoming events, follow their Facebook page, Frankie Flav’z, or visit their official website, frankieflavz.com. To place an order for delivery, visit grubhub.com, seamless.com, or doordash.com. For any other inquiries, call The Point location in Harlingen at (956) 230-2043.