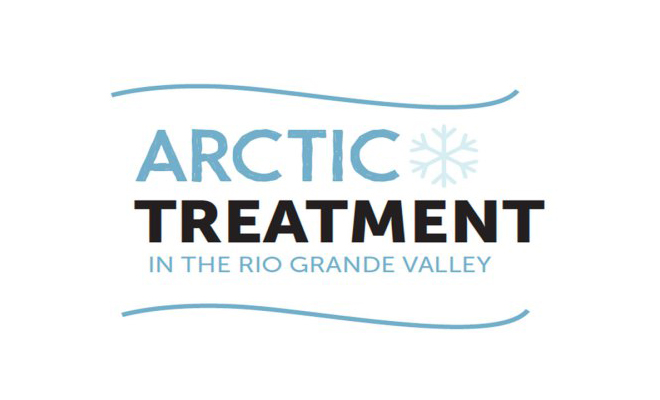 Some Valley residents are experiencing sub-zero temperatures this summer. We aren’t talking about air conditioners, here. This popular freezing treatment is known as Whole Body Cryotherapy, and is now available in the Rio Grande Valley.

Cryotherapy, in its various forms, has been around since at least 2500 BC when the ancient Egyptians would use cold to treat inflammation and pain. Since then, it has evolved in different ways. Localized cryotherapy still consists of treating injuries with ice.

“Besides drugs, cold therapy is one of the most effective ways to decrease inflammation,” physical therapist Cristi Cuellar said. “In my experience, most patients’ painful injuries have been caused by  overuse and inflammation.” Another form of local cryotherapy includes physicians using a freezing agent to treat external skin disorders or during laparoscopic surgery to treat internal issues. In the early 1800s, Dr. James Arnott of England was the first to use extreme cold for the destruction of tissue in his treatment of tumors and became the father of modern cryosurgery.

The cryochamber replaces cold water immersion and multiple ice packs, exposing patients to ultra-low temperatures as cold as -240 degrees Fahrenheit over a period of two to three minutes. This stimulates the body’s natural response to decrease inflammation, pain, spasms, and promote healing, because the sudden temperature change causes blood vessels to massively constrict and dilate. 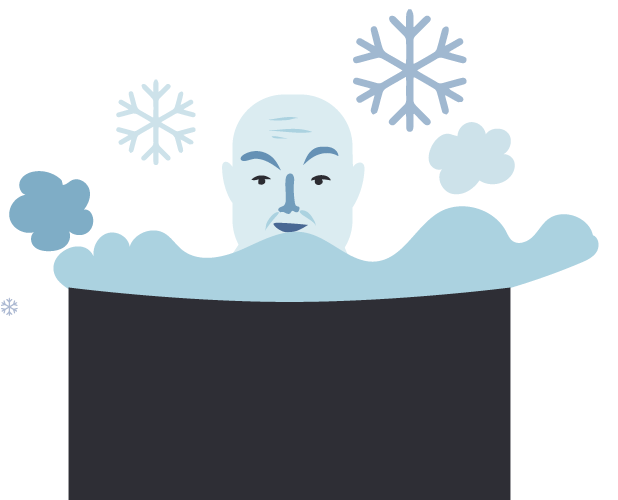 Whole Body Cryotherapy has been very popular with professional athletes for several years now. The Dallas Mavericks have cited cryotherapy as their secret weapon in training recovery. Many other types of athletes have also felt the benefits of this treatment.

“The first time I saw this, I was at a popular gym where MMA fighters trained, and one of the trainers told me that it made a huge difference in their overall wellness,” Cuellar said. “They were able to train more days, lifting heavier and recovering faster. I had to try it for myself.”

Agustin Salazar of the RGV Tennis Academy believes in the benefits of Whole Body Cryotherapy. He has been doing cryotherapy regularly for four months so far.

“The first time I came in was with my knee,” he said. “I used to wear a knee brace for tennis, but I don’t use it anymore. I had shoulder pain. I had bad shoulder pain but the swelling has gone away.” Salazar said he tries to come in for treatment four or five times a week when he can.

Athletes aren’t the only ones to swear by the benefits of Whole Body Cryotherapy. The internet is full of celebrity cryotherapy selfies, including Derek Hough, Lindsay Lohan, Kevin Hart and Mandy Moore. It has also been reported that Jennifer Aniston and Demi Moore use regular Whole Body Cryotherapy to keep their skin looking younger.

“It helps to produce collagen in your skin because [your body] essentially thinks you’re in this cold, harsh environment, so wants to make sure it doesn’t dry out and it produces collagen which helps us keep a youthful appearance in our skin,” said Summer Garcia, owner of Coldfit Cryotherapy Studio in McAllen. To ensure proper collagen production, the cells need vitamins, minerals, and healthy vascular function. During cryotherapy, blood vessels respond by a quick constriction to keep the core temperature and protect the organs and tissues and a rapid dilation when we are back to normal exterior temperature. By widening the vascular system, blood circulates better. It can eliminate waste and toxins more efficiently and allow the distribution of vitamins and nutrients.

There are two different types of chambers currently used in Whole Body Cryotherapy: liquid nitrogen chambers and electric cooled chambers. Liquid nitrogen cooled chambers envelop the users in super-cooled nitrogen vapors to lower the surface temperature of the skin. In these chambers, the head remains outside of the chamber, while inside the users are wearing minimal clothing such as shorts, gloves and socks. They are asked to rotate slowly around in the chamber so that the gas jets are not aimed at the same place for too long. 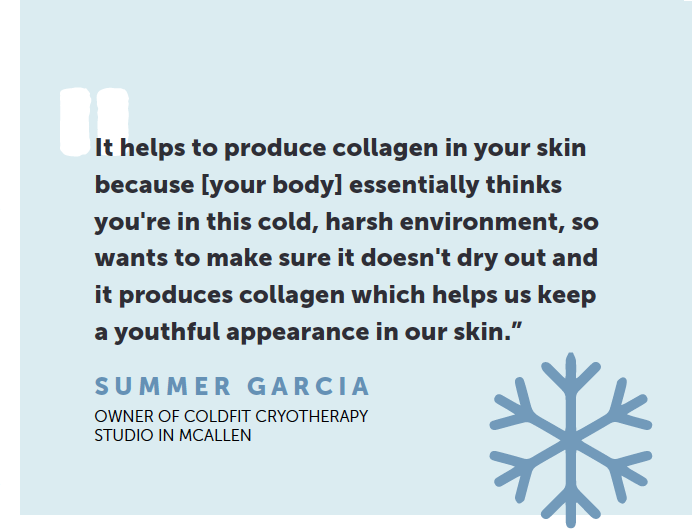 When Garcia was doing research on Whole Body Cryotherapy before opening her own cryotherapy studio, she visited many different locations and tried out the different chambers.  She described a time she was in a nitrogen chamber and was distracted, talking to the attendant and got a slight nitrogen burn on the backs of her legs because she wasn’t rotating.

“That made me a little nervous about those [chambers],” Garcia said. The FDA also has warned about the potential risks with nitrogen cooled cryotherapy systems, citing asphyxiation, frostbite, and burns.

For those reasons, Garcia and her partners chose to use electric cooled chambers at Coldfit.

“With ours there really is no risk,” she said. “There’s no reported injuries and no reported deaths related to the type chamber we have.” The electric chambers cool uniformly, dispensing with the users need to rotate. There is constant fresh oxygenated air in the chamber with no gas and the added benefit of true whole body cooling, including the head.

One of the claims about Whole Body Cryotherapy is that it is good for weight loss. Garcia confirms that after one of the three-minute treatments, the average body burns from 500 to 800 calories in order to warm back up, but does not really advocate this as a standalone weight-loss treatment.

“It does help your metabolism and it does help you burn those 500-800 calories, which is significant,” she said. “That can be a whole meal. But, you know you have to eat right, exercise.” Burning those calories won’t help you if you aren’t doing all the other things to lose weight as well.

“If you are working hard at eating right and exercising, this is a supplemental calorie burner,” Garcia said. Coldfit has a warm up room with exercise machines that clients can use after their session to help them raise their body temperature and perhaps burn a few more calories in the process.

There are many people that have tried Whole Body Cryotherapy and felt better because of it.  Dr. Edgar Cruz, general surgeon, has been a client of Coldfit since it opened. Cruz says he has had chronic knee pain and knew the benefits of cryotherapy. He felt a difference after just one session and has made it a practice to come in regularly, six days a week. He has been able to exercise better and the knee pain is almost gone.

“When I travel, I want to take the chamber with me,” Cruz said. “I’ve been feeling so great!” He isn’t the only one to have that reaction. Innumerable athletes and celebrities have become obsessed with this treatment, some even to the point of buying their own personal cryotherapy chambers.

While experts are still debating on the reported merits of Whole Body Cryotherapy, there are plenty of people who feel it has helped them when they most needed it, including Valley residents who are grateful to have this service here, where they live.